How to Sight-Read in Any Key: Part III + FREE Exercises

Last week, in How to Sight-Read in Any Key: Part II I showed you how to construct major and minor scales, arpeggios and chords and how practising these would help you familiarise yourself with the key signatures. I also suggested several ways to practise these as well as a specific way to practise them if your main goal is to get better at sight-reading in all keys.

This week, I’ll be going through four exercises that you can do alongside the scales, chords and arpeggios to further reinforce your familiarity with all major and minor keys. I’ll also share other ways you can get to know the keys better.

If you want to grab a copy of the exercises, just fill out the form below:

Exercises in All Keys

I’m sure you’re all familiar with five-finger exercises. They’re usually not that exciting but when it comes to playing them in all keys, that’s when the fun begins because you have to transpose the exercises into every key, leaving little room for mindless playing!

The Five-Finger Exercise is the easier exercise to start with because the hands stay in a fixed position so I recommend you start with this one. Here is a sample of it:

It begins with C in the major key followed by the minor key. Then you go up chromatically through all the major and minor keys. I’ve marked repeat signs to remind you that you can and should repeat the ones you have trouble with. Once you’re able to play this exercise in all keys with ease, move on to the Hanon Exercise.

This exercise is slightly harder than the five-finger exercise because it moves up the scale and uses all the notes of the scale, not just the first five notes. I’ve adapted one of Hanon’s exercises by adding a preparatory scale before each new key to help you transpose in that key.

Here is a preview of it:

3. The Circle of Fifths Exercise

This is another five-finger exercise but this one follows the order of the keys around the Circle of Fifths, beginning with C major, then going through all the keys with sharps (G major, D major, etc), then C major again followed by the keys with flats (F major, B-flat major, etc.). I’ve also added chords I and V7 in the left hand to make it slightly more challenging but you can always leave those out if you wish. Chords I and V7 are frequently used in classical music so they are worth learning.

For example, in C major, chords I and V7 are:

N.B.: The V7 chord in the exercise (and in many pieces) is written as a 1st inversion chord with the 3rd note (the D, in this case) omitted: B, F and G.

Here is a sample of the exercise:

This exercise is based on the arpeggio and the triads (three-note chords), starting with the major key, then the minor key before going up one semitone to the next key:

Besides exercises, here are some other ways to better familiarise yourself with the keys:

Transposing is what you already have to do for most of the exercises above. It is a great way to learn to “think” in other keys. You could go one step further and transpose simple tunes into other keys.

For example, you could take this well-known Minuet in G major:

And transpose it up to A major, which means you would then start one note higher and have three sharps in the key signature (F, C and G). You would end up with:

One another method is to improvise in all keys. Here are some ideas you could try:

Make up your own exercises

If you want to work in a specific key, why not make up your own exercises or vary the ones I’ve shown you here? It doesn’t have to be complicated. The whole idea is to get to know the notes and the patterns of each major and minor key so play around and have fun with it.

We’ve reached the end of this series. Thanks for sticking to the end. I hope you’ve enjoyed it and learned something useful.

While this article is over, your journey has only just begun. If you want to be able to sight-read pieces in any key, review your theory (see Part I), work on your scales, chords and arpeggios and take the quiz if you haven’t already (see Part II) and try out the exercises. And if you feel adventurous, try transposing, improvising or inventing your own exercises. You’ll see that slowly, you’ll feel more comfortable in all keys.

Would love to hear your experience. In what keys do YOU find it difficult to sight-read? How many sharps or flats can you handle in a key signature? Let me know in the comments below.

How to Play Without Looking at the Keys + FREE Exercises 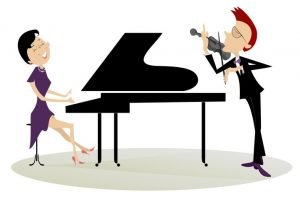 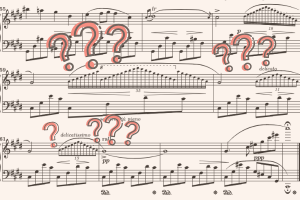 PrevHow to Sight-Read in Any Key: Part II (Quiz Included)
Learn How to Read Ahead with the Read Ahead AppNext

How to Play Without Looking at the Keys + FREE Exercises